OECD & EC Report: “Immigration & Labour Shortages: Evaluation of Needs and Limits of Selection Policies in the Recruitment of Foreign Labour” 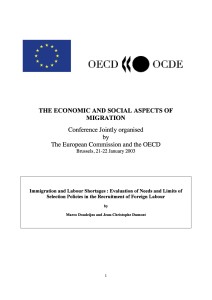 This document presents the result of studies recently carried out in a range of OECD Member countries on labour shortages and the role that migration can play to alleviate labour shortages. In spite of the methodological problems, that may be involved in assessing labour shortages, all the available data and research confirm that labour markets are tight in several OECD Member countries, principally in the areas of advanced technology, but also relating to some unskilled occupations. However, factors such as the amount of pressure on the market, the type of shortages involved (absolute/relative, short/long term), their key features (sectors/skill levels affected) and their determinants (skills mismatch, inadequate labour supply, persistent labour-market rigidities) all vary markedly across countries. There are labour reserves but they vary in size across countries and cannot always be readily tapped.

There is now keener competition among OECD countries to attract the human resources that they lack and retain those who might emigrate. Many countries amended their legislation in the late 1990s to facilitate the entry of skilled foreign workers. Most of them merely introduce more flexibility into their existing migration policies, but some also launched more specific programmes. These developments have not been called into question by the recent economic down-turn. The programme introduced, although generally very selective, are not all identical (recruitment may be temporary or permanent, general or occupation-specific, or target certain parts of the world). Whatever the type of programme, selective employment-related immigration policies will be effective only within limits and will require more in- depth analysis to develop appropriate policies.