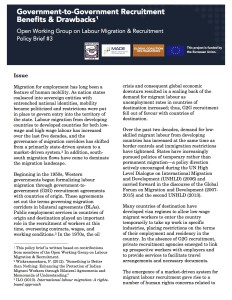 HUMAN RIGHTS MUST BE INCLUDED IN ALL GOVERNMENT-TO-GOVERNMENT AGREEMENTS ON MIGRANT LABOUR RECRUITMENT!

International labour recruitment was, in its earliest form, governed by government-to-government (G2G) agreements, outlining the sectors for which migrants would be recruited, the terms of their employment, and government mechanisms to facilitate recruitment. As the demand for migrant labour grew, many of these functions were outsourced and work visa regimes in countries of destination were opened to prospective migrants outside of G2G agreements, facilitating the emergence of private recruiters.

Some governments have attempted to address the rights concerns associated with private sector labour recruitment by forging bilateral agreements and memoranda of understanding, outlining steps they will take to protect migrant workers in specific recruitment corridors. Others have looked at a return to G2G recruitment to eliminate private recruiters altogether.

These government agreements are motivated by economics—ensuring that labourers in countries of origin can secure work, alleviating unemployment pressures and ensuring a steady stream of remittances, and that employers in countries of destination have access to a cheap source of labour. Human rights protections and transparency in the process of forging these agreements are sorely lacking. 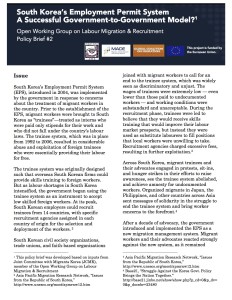 South Korea’s Employment Permit System (EPS), introduced in 2004, was implemented by the government in response to concerns about the treatment of migrant workers in the country. This system fully eliminates private recruitment agencies from the recruitment process and requires that labour migration be governed by G2G agreements.

However, migrant communities and civil society point to important gaps in rights protections, even under this so-called model G2G system.

GOVERNMENT AGREEMENTS ON LABOUR MIGRATION MUST BE TRANSPARENT AND BASED ON GLOBAL HUMAN AND LABOUR RIGHTS STANDARDS.
#HumanRightsinG2G #RecruitmentReform