Muscat: As governments commit to new labour contracts designed to safeguard their citizens overseas, the debate over fair pay and conditions for expatriate maids in Oman has reopened.

Some employers in Sultanate have expressed “disappointment” over increasing procedural difficulties when trying to hire domestic staff, while champions of migrant rights, and housemaids here in the country, have lauded the efforts of governments in developing better labour migration policies. 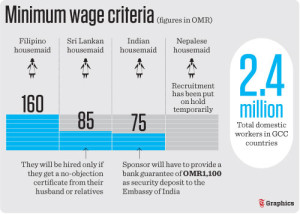 Recently, the Philippine embassy in Oman announced OMR160 would be the minimum salary for Filipino housemaids. It is the latest such move to protect domestic expat staff that has sparked debate on social media.

A notice from the Philippines authorities dated February 15, 2015, addressed to recruiting agencies and employers stated that effective from March 1, the embassy’s labour attaché department will strictly implement the Philippine Overseas Employment Administration (POEA) rules and regulations on the $400 or OMR160 as minimum salary for household service workers in Oman.

Hiring of Indonesian domestic workers in Oman was suspended from March 1, according to a senior official of Indonesian embassy in Muscat, and they had temporarily stopped endorsing job requests.

Similarly, recruitment of Nepalese housemaids in Oman has also been put on hold.

D B Chettri, president of Muscat chapter of Non-Resident Nepali Association (NRNA), said that the ban has been imposed to regulate the recruitment process and to ensure safety of female workers.

“It will also end the malpractice of manpower agencies in Nepal who recruit domestic workers,” he said.

Following the ban, the Ministry of Labour in Nepal appointed a committee to study and recommend regulatory mechanisms in the recruitment process of housemaids.

“Once the recommendations are made, new rules will be introduced and recruitment agencies will have to follow them,” he said.